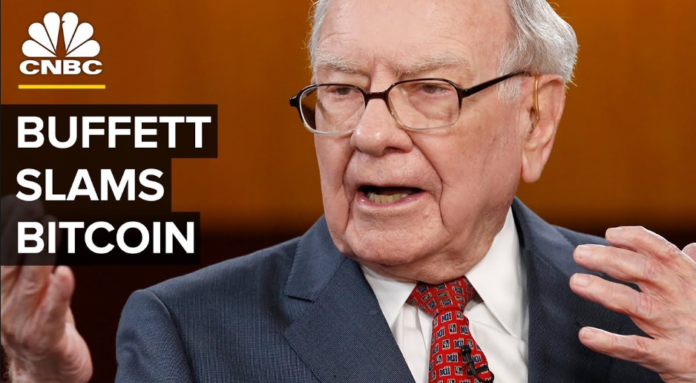 “It’s a gambling device…” Buffet told a group of reporters convening ahead of Berkshire Hathaway’s annual meeting held at the CHI Health Center in Omaha, Nebraska, May 4th.

“There’s been a lot of frauds connected with it. There’s been disappearances, so there’s a lot lost on it. Bitcoin hasn’t produced anything,” he said.

Buffet also took pains in an interview with Yahoo Finance May 1st to distinguish Bitcoin from a genuine investment.

A good investment, said Buffet, is part of a dynamic and real-world system of production:

“If you buy something like a farm, an apartment house, or an interest in a business… You can do that on a private basis… And it’s a perfectly satisfactory investment. You look at the investment itself to deliver the return to you.”

But Bitcoin, said Buffet, is a closed system:

“If you buy something like Bitcoin or some cryptocurrency, you don’t have anything that is producing anything…You’re just hoping the next guy pays more. And you only feel you’ll find the next guy to pay more if he thinks he’s going to find someone that’s going to pay more.”

“You aren’t investing when you do that, you’re speculating,” he said.

Buffet also portrayed Bitcoin investing as “a game” in the May 1st interview:

“If you wanna gamble somebody else will come along and pay more money tomorrow, that’s one kind of game. That is not investing.”

He exemplified “the limited use” of Bitcoin on May 4th by comparing a bitcoin to a seashell or a button on his jacket:

In a lengthy submission to the American Securities and Exchange Commission asking the regulator not to approve a Bitcoin ETF (exchange-traded fund), Stanford-Trained Brazilian Professor Jorge Stolfi professed a similar take on Bitcoin: that it is a negative sum system that can only enrich one investor by taking from another:

“The people who have ever bought bitcoins, considered as a whole, have put into the game more money than they have got back…That is not the conclusion of any economic analysis, but of elementary mathematics and those obvious facts about the flow of money…that sum is in fact very negative.”

Revenue-negative features of Bitcoin, Stolfi argued, are made worse by the fact that miners take $10 million dollars a day out of the system in the form of fees:

“It is not possible to estimate how that cost would change in the future. However, it is obvious to any impartial observer that the current cost of building the blockchain — over 10 million USD per day — is absurdly excessive, given its (lack of) significant use.”

A genuine investment, said Stolfi, is associated with real-world value-creation and has better terms for investors:

“Stocks have dividends; bonds have legally binding promises of redemption with interest… (Stocks) also give…the right of property of a certain percentage of the company — including its assets, and any profits that the company may make in the future.”