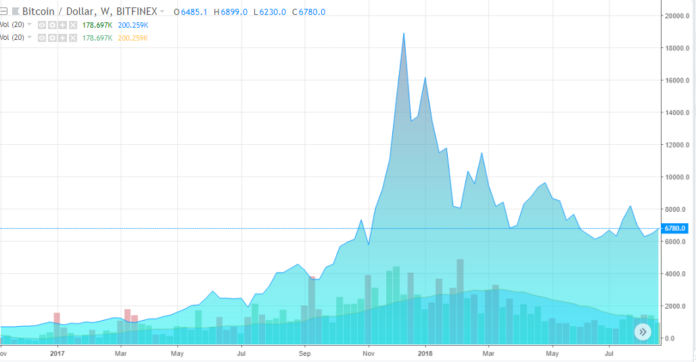 Mike Novogratz is reinventing himself as the king of bitcoin.

Novogratz bought about $500,000 at less than a dollar per ether and left on a vacation to India. By the time he returned a few weeks later, the price had risen more than fivefold. He bought more.

Over the course of 2016 and into 2017, as ether surged to almost $400 and bitcoin topped $2,500, Novogratz sold enough to make about $250 million, the biggest haul of any single trade in his career. He said he paid tax on the profits, bought a Gulfstream G550 jet and donated an equal amount to a philanthropic project for criminal justice reform.

The swaggering macro manager who flamed out at Fortress Investment Group LLC is starting a $500 million hedge fund to invest in cryptocurrencies, initial coin offerings and related companies. Novogratz will put up $150 million of his own money and plans to raise $350 million more by January, mainly from family offices, wealthy individuals and fellow hedge fund managers, said a person familiar with his plans.

At that size, the Galaxy Digital Assets Fund would be the biggest of its kind and signal a growing acceptance of cryptocurrencies such as bitcoin and ether as legitimate investments. For Novogratz, 52, the fund marks a comeback to professional money management after humbling losses at Fortress and almost two years of self-imposed exile from Wall Street.

Novogratz, in an interview with Bloomberg Television, declined to confirm or deny that he’s raising a fund, citing regulatory constraints. He did talk at length about his recent experience with digital assets and why he’s eager to trade them.

“This is going to be the largest bubble of our lifetimes,” Novogratz said. “Prices are going to get way ahead of where they should be. You can make a whole lot of money on the way up, and we plan on it.”

‘Trading Junkie’
Just this month, bitcoin hit a record of almost $5,000 then plunged 30 percent in two weeks as buyers weighed the impact of a Chinese ban on initial coin offerings and domestic trading in virtual currencies.