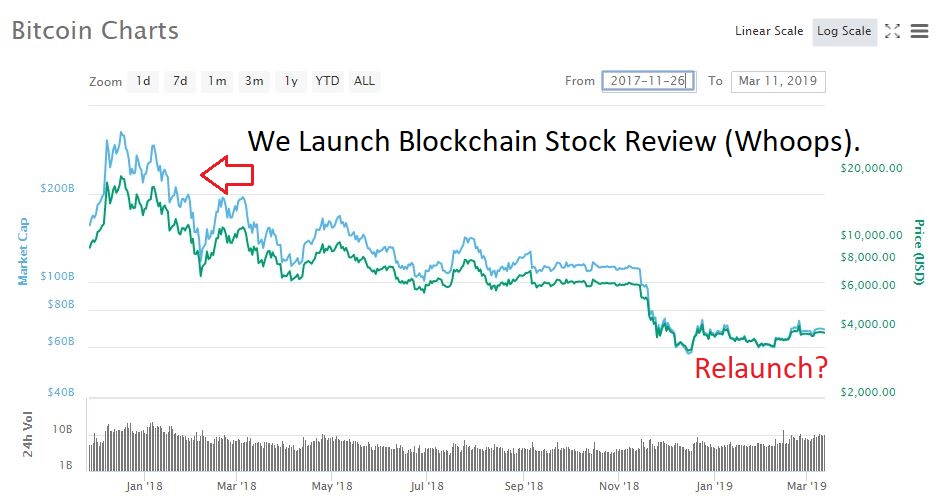 “That price action is INCREDIBLY similar to 2015, to what is taking place today. It is the primary reason why I believe that Bitcoin has bottomed, and it is why I am frantically buying like the bottom is in. Now, whether the bottom is actually in is obviously yet to be seen.”

Don’t forget, I was labeled as a “” by so many bulls in during this bear because I understood where was going and I was bearish when many people didn’t want to hear the reality of the market. I warned of 3,000 while we were still above 10,000.

Now, I understand where price is going again, and I am more bullish than I have ever been on any other market in my eleven years as an analyst.

Hi friends! Welcome to this update analysis on Bitcoin! Fortunately, I am back from my weeks-long journey and I’m able to post from a computer like a normal human being. So, without further ado, let’s see what the greatest coin in crypto is up to.

In front of you, I have a side-by-side comparison of Bitcoin . On the left is the current daily BTC chart, and on the right is the daily price action around the bottom of the 2014-2015 bear market. If you’ve been following my BTC analyses for the past few months, you know that I had discovered a fractal symmetry between these two periods in the progression of Bitcoin .

On the chart to the right, you can see that during the 2015 bear market, Bitcoin formed a bottom inside of a downtrend channel (in blue,) after coming into contact with the bottom of the channel. Then, Bitcoin held the weekly 200 MA (in green) and rallied up to create a sort-of descending head and shoulders pattern (in red.) That happened while it was simultaneously forming a triangle (in black.) All during that time, Bitcoin remained below the 50 EMA (in orange.) It did breach the 50 EMA a few times prior, but Bitcoin was unable to successfully remain above the 50 on those prior attempts. On Feb 27th 2015, we can see that Bitcoin successfully broke out above the 50 EMA for a period of time. During that breakout, it produced two pumps to the upside, then came into contact with the top of the downtrend channel . From there, we can see that Bitcoin printed a sharp decline to the 50 EMA , and then proceeded to fall to the 61.8% retrace, where it ultimately found support.

That price action is INCREDIBLY similar, to what is taking place today. It is the primary reason why I believe that Bitcoin has bottomed, and it is why I am frantically buying like the bottom is in. Now, whether the bottom is actually in is obviously yet to be seen. However, I do see a slight potential that we could fall to one more lower low later this year, despite this fractal symmetry to the last bear market bottom. Things like the oversold spikes on the weekly RSI , lead me to believe that we could see another dip later this year, but I don’t really care. If that does happen (and that’s a big IF) I suspect it will only be slightly lower than the 3150 low of December, perhaps only to 3,000. Whether that happens or not, is something I truly don’t care about. Don’t forget, I was labeled as a “permabear” by so many bulls in during this bear market, because I understood where price was going and I was bearish when many people didn’t want to hear the reality of the market. I warned of 3,000 while we were still above 10,000. Now, I understand where price is going again, and I am more bullish than I have ever been on any other market in my eleven years as an analyst. In my view, this next bull market is likely to rally to around $150,000, by approximately August of 2023. I realize that is an audaciously specific date, and many people will scoff at it, but I that’s what I have calculated and I have great reason to believe that my calculations will continue to prove to be accurate.

Now, if we compare the price movement of the 2015 chart on the right, to the current chart on the left, you can see that the similarities are incredible. Price had fallen to the bottom of the downtrend channel , forming a bottom on it. From there, we can see that price held the weekly 200 MA (in green,) and then rallied into a triangle (in black,) which it also formed a head and shoulders pattern inside of (in red.) Just like 2015, this all took place below the 50 EMA . Then we saw a breakout above the 50 EMA , and two pumps to the top of the downtrend channel . Now, bitcoin has failed to breakout above the top of the downtrend channel , and for the short-term, I think we will head down to the 61.8% retrace, just like we did in 2015. That will put BTC somewhere around 3500. From that point, I believe that BTC will enter a boring, sideways consolidation period.

So many people are talking about how Bitcoin is going to the moon this year, and blah blah blah. While I do believe that Bitcoin will ultimately explode in value, I don’t think that it will happen as quickly as people think. Many are under the impression that the market cycles are four years, and that it will moon as soon as the halving occurs. While the halving will be a catalyst, it will not produce a parabolic rise. It is a fact that the market cycles are getting longer, and the rise is perfectly in time duration between cycles is perfectly linear. That linear rise in duration, means that the next bull market peak is about 4.5 years away. Based on my technical analysis , I believe that it will be around 150,000, as I said earlier. The linear cycle duration is also why I believe that we could see a slightly lower low later this year, which (if it occurs) would most certainly be the ultimate bottom of this bear market. Anyway, that is my opinion on where the market is likely to go, in the near term and the short term.

As a side note, I did move the top of the current downtrend channel lower than I previously had it, after I realized that it could and should be drawn there. On each chart, the top and bottom trendlines of the downtrend channels have multiple touches confirming their current orientation.

I’m the master of the charts, the professor, the legend, the king, and I go by the name of Magic! Au revoir.

This information is not a recommendation to buy or sell. It is to be used for educational purposes only.